Is the security dossier really away from Hamas-Fateh dialogue?

It was clear in all previous rounds of talks between the two Palestinian rivals Hamas and Fateh that the security dossier is the main deadlock in the way of their reconciliation. This dossier always consumes the time of their talks and, at the end, it is not resolved. Such a dossier is not difficult to be figured out, but the problem is that each of both rivals has its own view about it which it too far from the other’s.

In the opposite side, Hamas sees that the role of security apparatuses is to protect Palestinians’ security and confront Israeli threats against them. There mustn’t be a room for cooperation and coordination between Palestinians and Israelis in this sensitive dossier. It insists that this endangers the life of Palestinians and adds more complications to their lives. Therefore, at the time each side is stick to its view, it appears that there is no compromise regarding this dossier in the horizon.

Of course, each side has its own and logical reasons for sticking to its position. For Fateh and the PA, it would encounter a number of punitive Israeli measures if it carried out any compromise on security issues agreed upon with the Israelis. It will face a ban of movement of senior officials, freeze of tax revenues on Palestinian imports collected by the Israeli customs, attacks against posts of security apparatuses and an international pressure to disown the reconciliation. Fateh cannot resist all these measures and this is clear in its history. The last example was its disownment of the results of the PLC elections in 2006 and the security chaos it created on the ground.

For Hamas, it cannot compromise any of its positions towards the security dossier because it believes that it is the legal representative for Palestinians and it got this legitimacy through resistance. This position was reinforced through the PLC elections. Hamas also believes that when Palestinians elected it, it means that they elected the programme of resistance. Therefore, it highly believes that any compromise about its position towards the programme of resistance will endanger its popularity.

The problem does not lie in the detention of prisoners in Palestinian jails, but in the details behind that, which will prove for the Israeli side that Fateh is really committed to a Palestinian reconciliation on the basis of halting cooperation and coordination in security issues.

In the third anniversary of war, Israelis prepared for new offensive

As the New Year rolls in, and many are speculating on whether or not Israelis and the west will go to war with Iran, Israelis have confirmed that they are preparing for a large-scale offensive in Gaza.

The timing coincides with the third year anniversary of the aggressive Israeli war against, which resulted in the deaths of over 1400 Palestinians.

Israeli news columnist, Gideon Levy, questions the wisdom of the coming offensive in light of Hamas‘ overtures toward peace with Israelis.

Also, how will the recent ‘Arab Spring’ influence the reaction of Israelis’ neighbours like Egypt, which now has a new and unpredictable leadership?

A civilian killed, several wounded in an Israeli air-strike 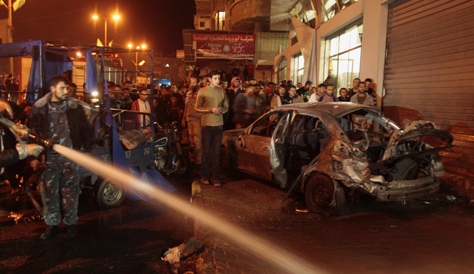 A 22-year-old civilian has been killed and 10 others wounded; tow of them suffered serious injuries, by two separate Israeli air-strikes in the Gaza Strip on Tuesday evening, medical resources said.

The civilian killed in the strike known as Abdullah al Telbani. He was attacked while driving a motor tricycle towards the north of the Strip.

The two seriously wounded were seating with him. All of them were taken to hospital by paramedics.

Witnesses said that an unmanned Israeli plane attacked the motor tricycle and that was confirmed by a statement of  the spokesman of the Israeli occupation forces.

The indicated that the strike was carried out jointly by two Israeli security apparatuses and that the target had been a squad involved in recent terror activity.

Palestinian officials and activists confirmed that the Strip lives a state of quietness for months and there were no Gaza home-made rocket launches.

The other 7 civilians were wounded by an earlier Israeli F 16 strike which the Israelis said that militants were their target.

Meanwhile, paramedics and other witnesses said that the target apparently was a civilian car and all the wounded were civilians. “That refutes comletely the Israeli claims of targeting militants,” a paramedic said.