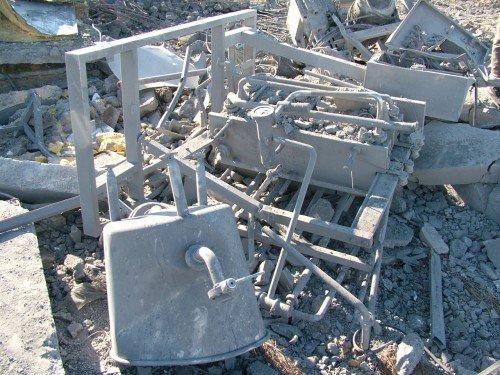 The third anniversary of the Israeli bombing of my own diary is approaching, so that, I am rethinking of myself more and more. May be I am another person and I do not know this fact!

It seems that it is my fault to be born for a couple who live in the Gaza Strip, the border line Palestinian city adjacent to Egypt. I have spent years and years when I was young working hard before and after school and during the breaks of my BA study. I had my own business and at the same time I had my BA certificate. That was more than wonderful for me.

Two sources of income for a young man in his early 20s. I was consent of that and started building my own house and enlarging my business. I had a very nice two story house with an area of 240m square. In the first store was my cheese factory and in the second floor were two apartments; one for me and the other for my precious parents.

The repercussions of my fault

During the aggressive Israeli war against the Gaza Strip, an Israeli F16 bombed my house and my cheese factory with two rockets that left everything a pile of useless rubbles. Thanks for God, none of my family or me was even injured.

I did not spend much time think what to do. I directly decided not to surrender to the Israeli oppression, but to go on and resurrect again from under the rubbles.

I started my business again and continued working in the field of journalism and teaching. But a couple of months later, I have just went to bed to have a restful sleep, but 15 minutes later, a sound of a big explosion aroused me. I found dust everywhere in my makeshift house. I thought that my house which was the target and thanked God that my wife and all of my eight kids were at their grandmother’s house that time.

I went out to see that my new diary has been destroyed again by an Israeli ware plane. Nothing remained. The building, the pasteurizer, the homogeniser, the boiler, the compressor, the van, the cheese, etc… Everything has gone.

Next day, my colleagues, journalists, came to visit me and report about what happened. A foreign journalist was a mong them.

The foreign journalist asked me: “Why do you think that the Israelis bombed you diary?” I answered: “You can ask them.” He said: “They say that you make rockets!” I replied from among about five tons of white cheese spread everywhere: “You have your own camera. You can take shoots for everything and show the whole world what you have seen. If you see rockets, you can shoot them and show the world.”  He shook his head and continued his work.

At that time, I have nearly left the work in media as I was busy in remaking my business. But, my mother who knew that I have lost all my property and I will not be able to go on asked me to stop working and to travel here or there to have a break.

I have decided to go back to the university seats again. I had an offer for a journalism course in from the University of Westminster in London in 2006/2007 and could not attend. I renewed the application and went on in this way.

I am not sure whether I am going back to do business or not, but may be. This is not what I wanted from all of this account, but I want to say that the world must look at the Israeli aggression and put an end to it, not to look at the countries that utilise the modern technology to afford luxurious life for their people. I mean Iran and the nuclear power.

However, I absolutely and completely oppose what is Iran doing, but at the same time, I ask the world to dismantle the Israelis from their WMD which is not a responsible entity. And it was tested during the disproportionate war against Gaza. It used white phosphorous against civilians.

Gaza celebrates the valentine in the dark

My sons use old candles to light in order to study

Authority of energy announced the halt of the plant generators as a result of the shortage of fuel resulted of the strict Israeli siege against the Gaza Strip.

The Gaza electric plant needs 600,000 litres of industrial fuel a day to operate well and support the 1.7m population.

A senior official in the ministry of health in Gaza said that the shortage of electricity threatens the life of hundreds of patients in hospitals. “Patients are already in pain because of the shortage of medicines and medical equipment,” the health official said.

The Gaza Strip has been living under a strict Israeli siege since 2006 and the electric plant was attacked several times by the Israeli wareplanes.

In the third anniversary of war, Israelis prepared for new offensive

As the New Year rolls in, and many are speculating on whether or not Israelis and the west will go to war with Iran, Israelis have confirmed that they are preparing for a large-scale offensive in Gaza.

The timing coincides with the third year anniversary of the aggressive Israeli war against, which resulted in the deaths of over 1400 Palestinians.

Israeli news columnist, Gideon Levy, questions the wisdom of the coming offensive in light of Hamas‘ overtures toward peace with Israelis.

Also, how will the recent ‘Arab Spring’ influence the reaction of Israelis’ neighbours like Egypt, which now has a new and unpredictable leadership?