And the international community is still silent!!! 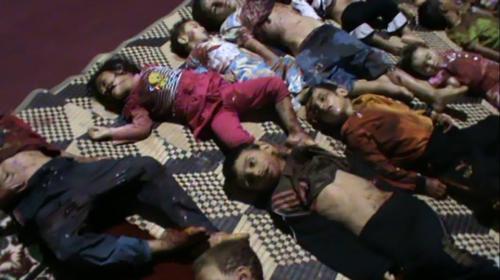 Syrian started their revolution against their dictator, Bashar al-Asad, more than one and a half year and they say that they are going to continue fighting him until he dies or quits.

News from inside the Syrian refugee camps say that no health care available and no food enough for them.

Massacres are being carried out in a daily basis. The latest was at Al Hula town in which more than 100 person were slaughtered worse than cattle. More than half of them were children and women.

All of this became normal daily news. A lot of people and politicians used to change from news to entertainment channels when the Syrian news is broadcasted. Yes, they are right. Similar everyday news. Bravo Bashar, go ahead.

Exactly, that what do they mean. Otherwise, what have they done to stop him. It is easy to know and it is clear. United Nations meeting, condemnation and fact finding committees. Thanks a lot. Is that a solution or a green card for more massacres?

I don’t know, exactly! When they Libyans rebelled against Mu’amar al-Gadhafi, they announced Libya a no-flying zone, then they attacked directly the Gadhafi military facilities and then his compound. They helped the rebellions till they get rid of their dictators.

Of course, there in Libya the best oil reserves in the world and Libya is far from their pampered baby, Israel. However, Syria has no oil and is adjacent to their pampered baby. So that, there are some reasons to keep this dictator alive and in control.

Why not this is not true? Is not this regime which implicitly conceded the Golan Heights to the Israelis? Isn’t it which has protected the Israeli borders for decades? Isn’t and isn’t and isn’t???

I don’t want anyone to say that the fact finding committee and the observers are a solution and that all what the international community can do! If so, you can give me an answer for what I said about Libya and an answer to what Ban-ki-Moon said.

UN secretary general said that the size of the massacres in Syria proves that there are terrorist organisations that carry out them. This means that he justifies the situation of the dictator Bashar and his regime.

Hilary Clinton, the US secretary of state, says that she is afraid of a huge internal civil war. It means that she gives free hand for the dictator Bashar and his regime to go on killing innocents and innocents have to surrender and say these are our nicks under your knives. Woooooww. That the equation!!!

This is the effort of the international community! Human rights declaration, Geneva conventions, Roma treaties, etc… Shit on all of that which is used by the way the big powers desire!!! Shit on the freedom slogans the big powers raise!!! Shit on the Arabs and the Muslims who are consent to live under the mercy of those powers.