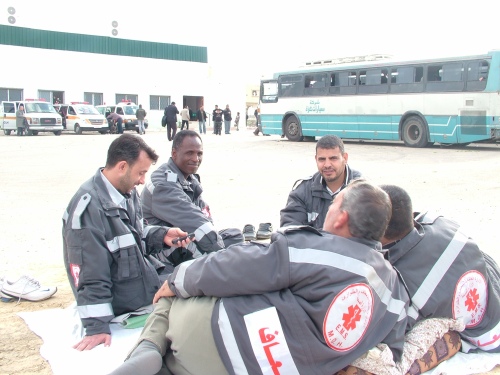 Palestinian paramedics obstructed at one of the closed crossings

A European human rights report indicated that about 4000 Palestinians were banned by the Israeli from leaving Al Karama Crossing.

The report titled “Restricted Hopes” which was published by the Euromid Observer for human rights showed that those cases were banned during the period between the beginning of 2011 and December from the same year with the range of 83 per week.

This ban was associated with humiliation against the Palestinians throughout strict checking measures, investigations by intelligence’ officers and waiting for long periods in bad conditions.

Accounts of citizens banned of travel, journalists, students and political analysts were what the report depended on to document its genuine information.

In addition, Palestinian parliamentarians and international agencies’ officials were interviewed by the report producers to give their witnesses.

The report shows that the ban of travel for thousands of Palestinians by the Israelis was unjustified. That classifies it as a kind of harassment against Palestinian civilians.

Meanwhile, the report warned of the Israeli intelligence blackmail of the Palestinians, mainly, patients, students and others of special circumstances.

The report also considered that the Israeli strict measures, against Palestinians’ movement in and out of their country and inside it, are racial violations of the International Human Rights Declaration.

At the end, the report recommended that International Community and human rights agencies have to bear their responsibility toward protecting the Palestinians and their right of free movement in and out of their country.

In addition, it asked them to take the Israeli human rights’ violations before law and to practise direct pressure on the Israelis to stop the isolation and arbitrary policies against Palestinians.

This entry was posted in General. Bookmark the permalink.